To save at checkout, enter coupon code: bulk saver

Which States Waste the Most Food?

Published
10/08/2019
Author
U.S. Packaging a
US packaging and wrapping

It won’t come as much of a surprise to say that food packaging is a big part of our industry. One of packaging’s most important uses is the protection and preservation of food.

However, the advances of modern packaging haven’t been able to stop the continuing wastage of huge quantities of food across America and the globe. Over the last few decades, humanity’s wastefulness has steadily become a more and more pressing issue. According to the United States Department of Agriculture, 31% of America’s 2010 food supply was wasted – that’s around 133 billion pounds at a retail value of $162 billion!

But which parts of the US are allowing the most food to be lost or thrown away? Which state’s residents are wasting the highest amount of their hard-earned cash each year on food they’re not even going to eat? And which countries across the world are the most wasteful with their food? We decided to answer these questions, and more, in the following study. Read on to find out what we discovered…

Our first goal was to discover which states spent the most on wasted food. To work this out, we started with data from the Bureau of Economic Analysis, illustrating each state’s total yearly grocery expenditure. This information isn’t hugely helpful by itself but, if we follow the USDA’s estimation that the US wastes 31% of its food, we can find out how much money each state spends on food that will eventually be wasted over each year. Each result, in turn, can be divided by every state’s population to show us an average of how much every person in each state is spending on food that will be wasted.

First, we’ll look at the states with the highest average wastage: 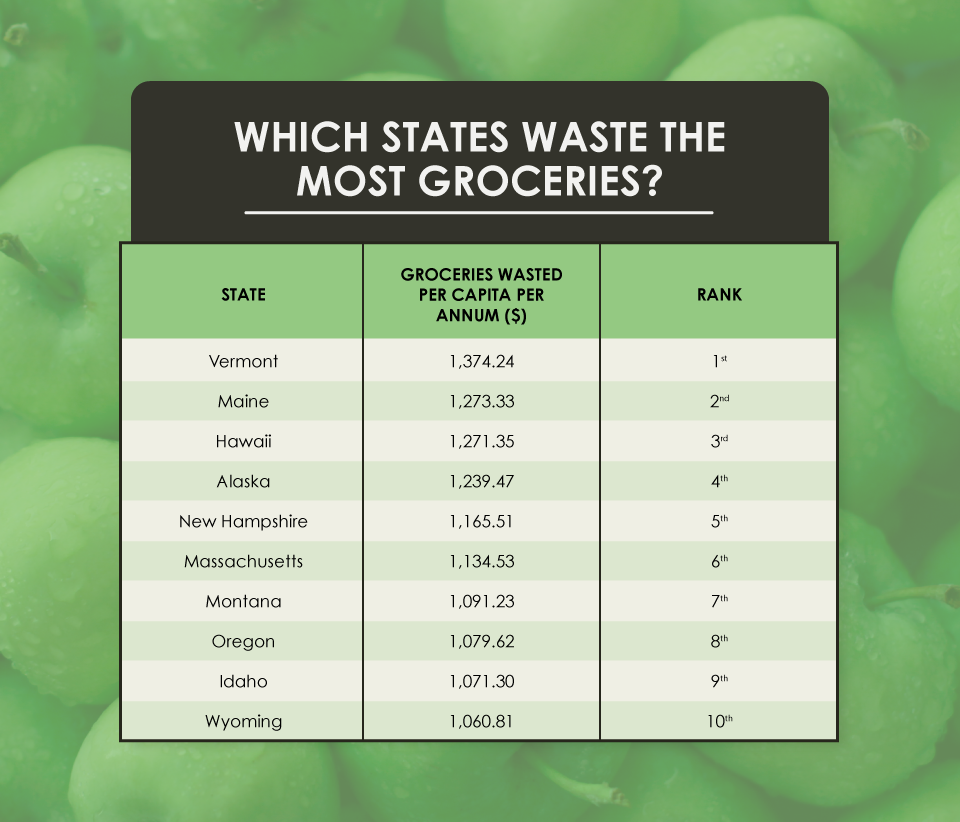 We found that Vermont residents spend the most on food that they’ll waste, totaling an average of $1,374.24 in wasted groceries per person each year. The Green Mountain State was followed by Maine in 2nd and Hawaii in 3rd, although the contrast between those two places was negligible – the difference was less than $2.

Let’s now move on to the states with the lowest average wastage: 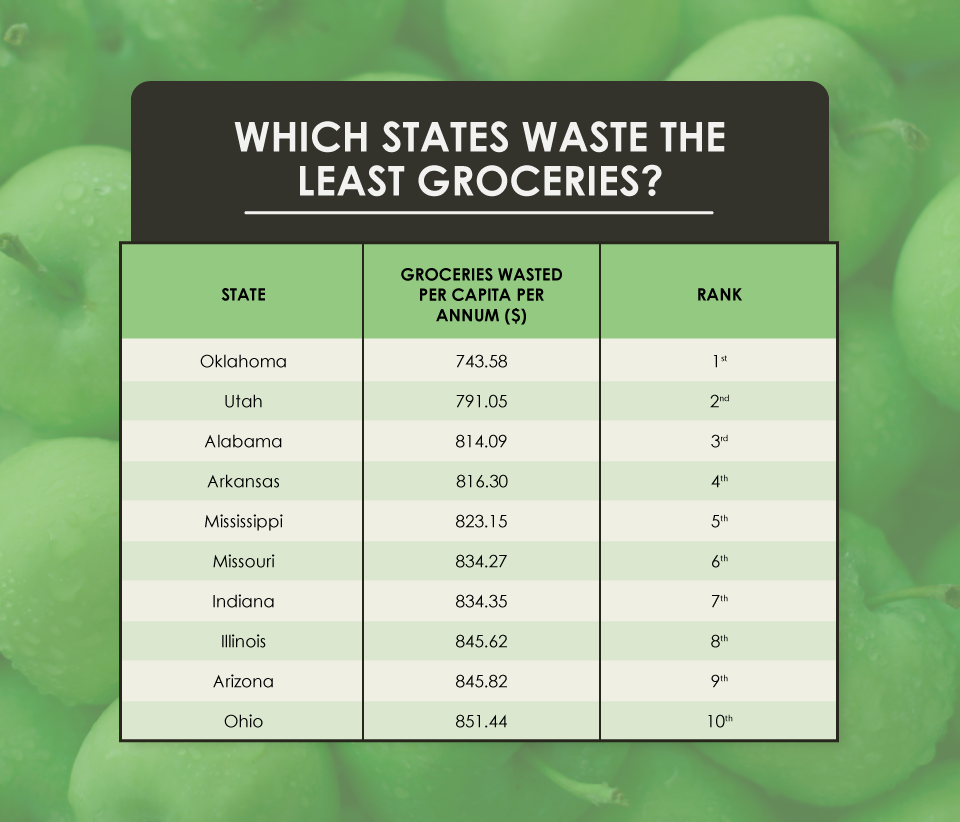 The state whose residents spend the least on wasted food turned out to be Oklahoma – its wasted groceries cost was nearly 50% lower than Vermont at the other end of the table. The state’s results stand out within the bottom ten as well: while most of these states are closely grouped together (Alabama in 3rd and Ohio in 10th are less than $40 apart), Oklahoma is nearly $50 ahead of Utah in 2nd.

Now we know which states are spending the most money on wasted food. However, people aren’t likely to make improvements to their lifestyle if they aren’t even aware that there is an issue. To that end, we tried to find out which states are the most aware of America’s food waste problem. To get this information, we used Google Trends data to discover how often people were entering searches related to the topic of food waste. 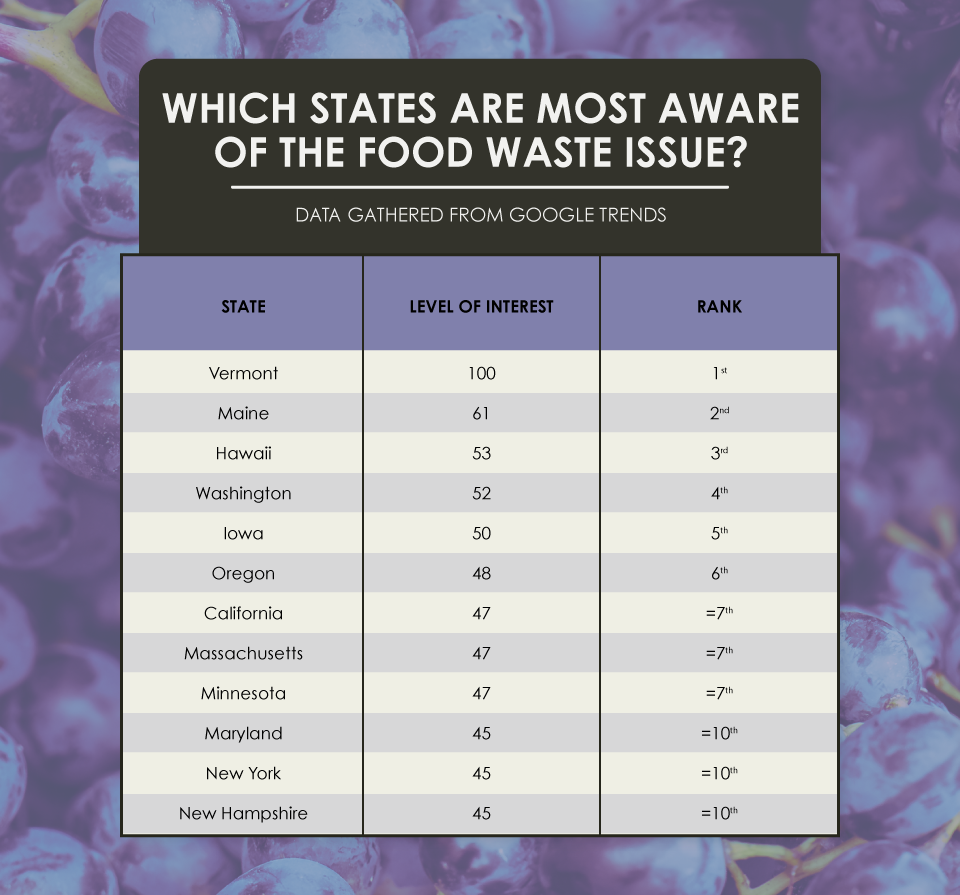 Incredibly, the top three states with the most interest in the topic of food waste are the same as the top three states that spend the most on wasted food – Vermont, Maine & Hawaii. So much for our theory that people with greater awareness would waste less food! Where these results differ is that they were a lot more widely spread compared to the ‘most wastage’ annual totals. Hawaii was 8 points behind Maine, while Maine was a staggering 39 points behind Vermont.

Now let’s take a look at the states with the least interest in the topic of food waste: 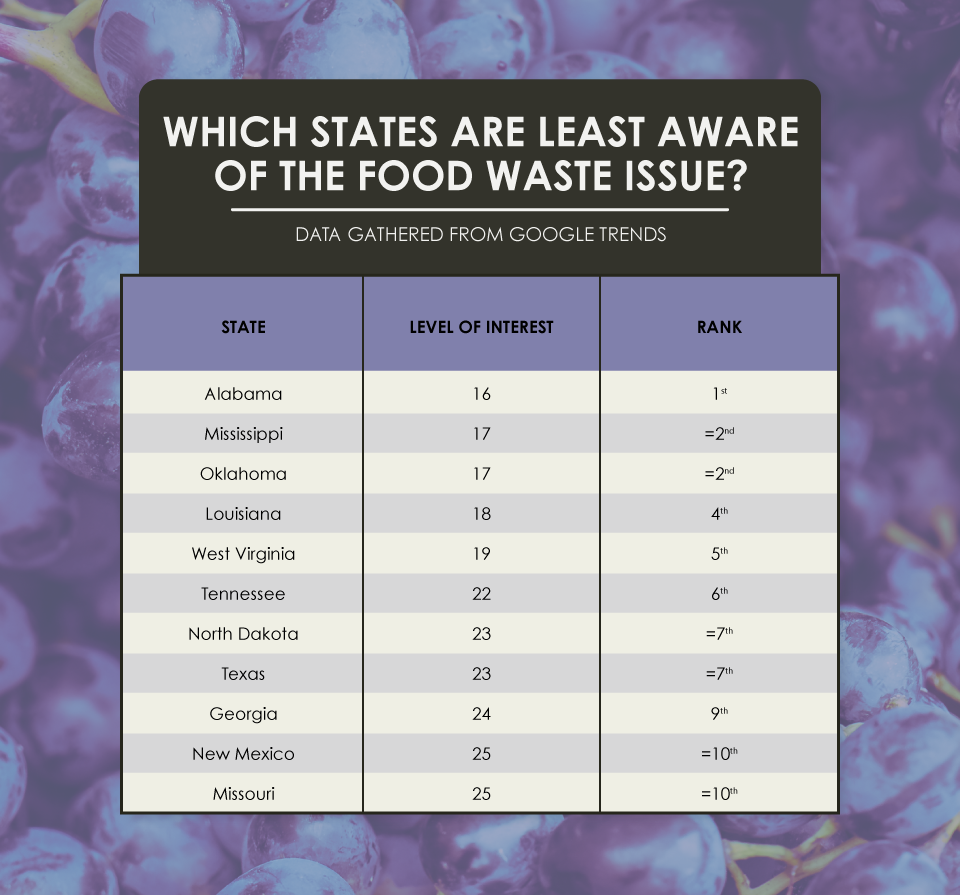 The entirety of the bottom ten is very closely grouped together, with many states holding the same score as one another – Alabama came last with 16 points, while 2nd last place is shared by Mississippi and Oklahoma, both only one point behind. Interestingly, most of the bottom ten are southern states.

First, we took data from the Economist’s Food Sustainability Index to discover which countries waste the most food per capita: 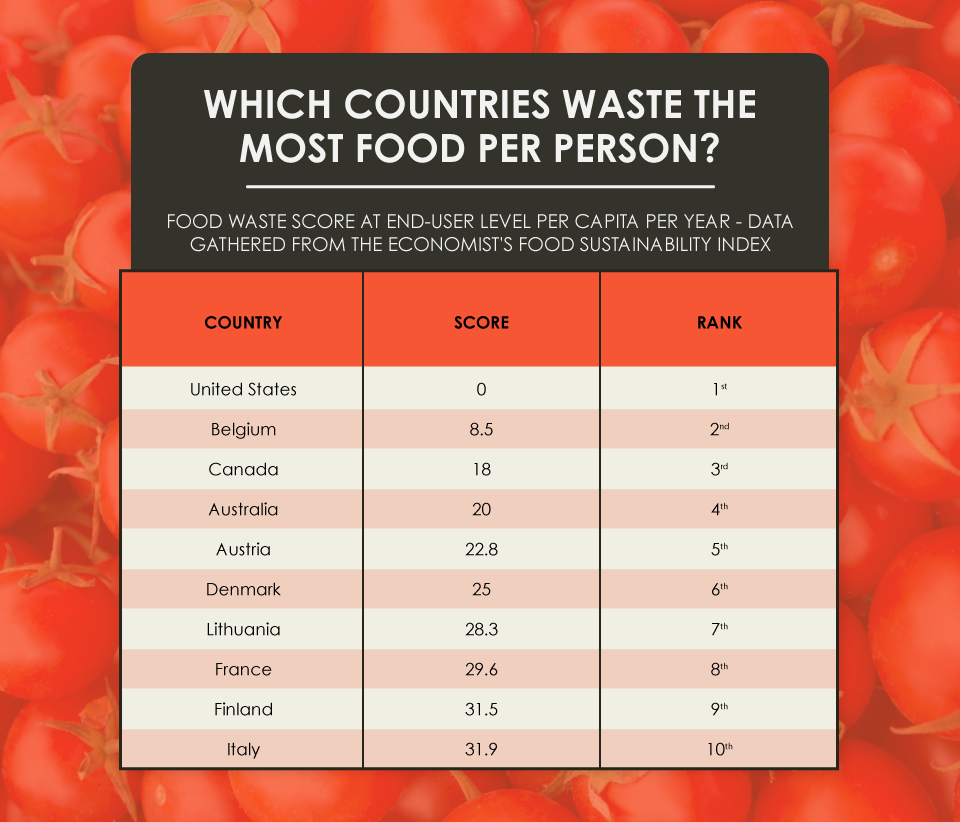 The nation with the highest amount of end-user food waste per person turned out to be the United States. Meanwhile, most of the rest of the top ten were European countries, with the exception of Canada and Australia.

Finally, we used Google Trends data once again to find out which countries are most aware of the topic of food waste: 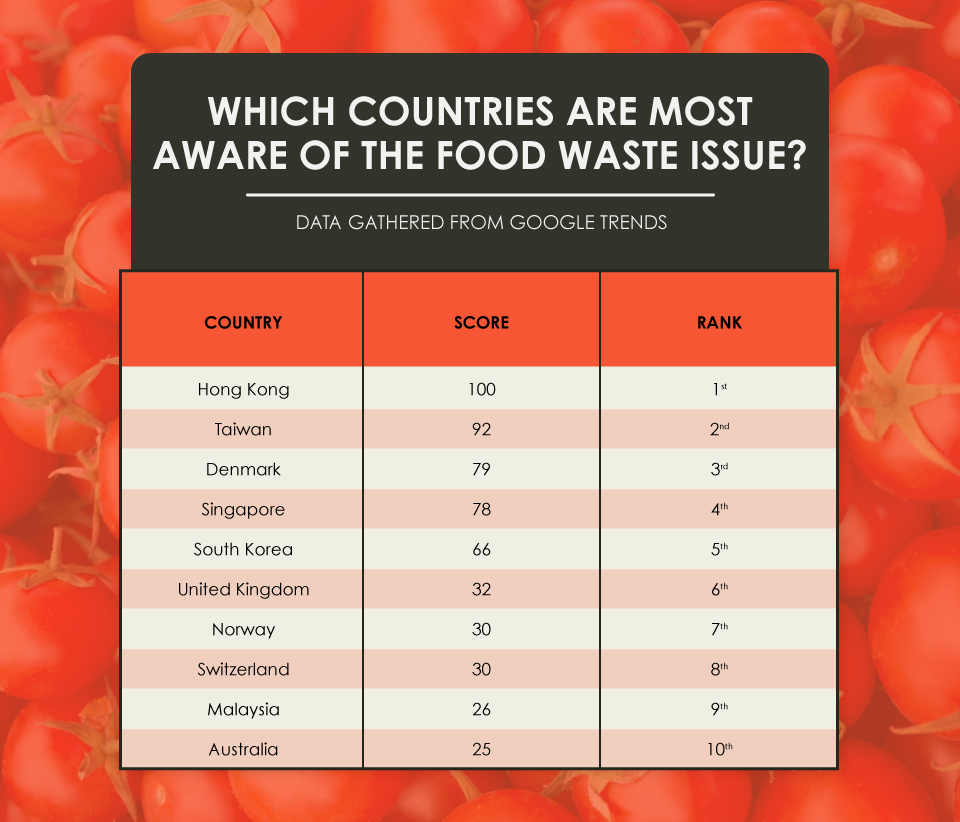 This time the data was fairly spread out, making for some intriguing results. Of the top five countries, four of them are Asian (Hong Kong, Taiwan, Singapore, and South Korea), the exception being Denmark. Most of the rest of the top ten were European countries (the UK, Norway, and Switzerland) before being rounded out by another Asian country (Malaysia) and Australia.

We can all agree that the issue of food waste is one that can’t be ignored but, as we’ve seen, some states and countries are definitely doing a better job of dealing with it than others. Do you think our data accurately reflects the amount of food that is wasted in your state or country? Or have you seen something different? Let us know in the comment section below. If you’d like to see the full dataset as well as our list of sources, click here.