Enter Coupon Code: Bulk Saver at Checkout to Save!

A Guide to Packing Tape

Packing Tape/Packaging Tape- Considered a pressure-sensitive tape used in a wide variety of applications, commonly used for sealing boxes and packages for shipments. The most common widths are two to three inches wide and made from polypropylene or polyester backing. Other pressure sensitive tapes include:

Transparent Office Tape- Commonly referred to as "Scotch tape" is one of the most commonly used tapes in the world. Used for a variety of applications, including sealing envelopes, repairing torn paper products, holding light objects together, etc.

Gaffers Tape- A heavy fabric or plastic tape. They are commonly used in the entertainment industry to hold down cables and chords. The adhesive leaves little residue and removes cleanly from objects.

Duct Tape- Has a plastic-coated fabric backing and a strong adhesive. They are often used by people who need a versatile and robust tape that can be easily torn by hand.

Masking Tape- Used for painting and protecting surfaces that should not be painted. Usually consists of a paper backing and an easy to remove adhesive.

Electrical Tape- Commonly made of vinyl, it is designed to stretch and conform to irregularly shaped surfaces. Used to help wrap electrical wires to protect them from the elements.

Double-Sided Tape- Has an adhesive on both sides, used for attaching two surfaces.

Filament Tape- Has fiberglass filaments embedded to increase the strength and integrity of the tape.

Spike Tape- A thinner version of Gaffers tape used to mark a place where people need to stand or where equipment needs to go. 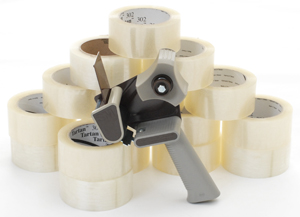 The History of Scotch Tape

Richard Drew was an engineer for 3M in the mid-1920s. He began to develop a tape in 1925, a two-inch-wide tan tape with a pressure-sensitive backing. The intention was to provide auto painters with tape to help them cover items that are not to be painted. When Drew was testing the tape to see how much more adhesive was needed a painter became frustrated and told Drew to "Take this tape back to those Scotch bosses of yours and tell them to put more adhesive on it!" The Scotch name was applied to the entire line of 3M tapes after that.

The first tape that Drew invented was composed of oil, resins, and rubber. When the adhesive is applied to its backing, it must be in a liquid state to spread. These days, chemists use a chemical or physical process to transform the resin into a bonding agent. The method used depends on the desired strength of the bonding agent.

The next crucial Scotch invention was in 1932 when the first handheld tape dispenser was invented. It was composed of cast iron and weighed almost 7 lbs. After that, in 1937, the "snail," Scotch's iconic tape dispenser, was created.

Since the invention of the handheld Scotch tape dispenser, Scotch tape has become an iconic part of the American culture. Often it is used as a general term for people desiring a transparent adhesive tape. U.S. Packaging & Wrapping is proud to offer Scotch Brand tape along with Tartan Brand tape, both 3M adhesive tapes.

It is essential for companies using packing tape to choose the proper tape and strength when deciding a tape to seal their cartons and boxes. The wrong choice of tape can cost companies money, time, and disrupt efficiency. Standard terms used to help describe tape are listed below.

Tensile Strength- Measures the force required to pull something to the point where it breaks. Click here for a blog post about tensile strength.

Backing Material- Material of a tape the adhesive is applied to. Common tape backing materials are vinyl, cloth, and polypropylene.

Elongation- How far a tape can stretch before it breaks. Elongation is commonly measured in a percentage of stretch, and tensile strength is measured in pounds.

Core Size- The inside roll diameter of a tape.

Length- The length of the tape on the roll. Commonly measured in meters, yards, or feet.

Width- The width of the tape on the roll. Commonly measured in millimeters or inches.

Thickness- How thick tape is. It is commonly measured in mils (milli-inch), which is one-thousandth of an inch or 25.4 microns.

What to Consider when choosing a packing tape?