Save On All Orders at Checkout With Coupon Code: bulk saver

What are Your State’s Online Shopping Habits?

Online shopping has become an almost unavoidable part of American life in recent years. For instance, Amazon is now one of the biggest companies on the entire planet, with two thirds of Americans saying they’ve used it before.

But which parts of the country show the most interest in buying products online?

We sought to answer this question. Using Google Trends, we can see how much interest the Google users of each state have in some of the most popular searches relating to the purchase of specific products. Our criteria for these search terms was based on which ones had the highest search volume (discounting duplicate and similar words).

The popularity of some of these words was very predictable: it will come as little wonder that keywords like ‘buy shoes’ and ‘buy books’ have particularly high search volume. Other terms were more controversial and make for more contentious rankings. Which states do you think rank first for terms like ‘buy guns’, ‘buy alcohol’ and even ‘buy weed’? Read on to find out…

Here are the top five rankings for the terms that we thought people would find most interesting. 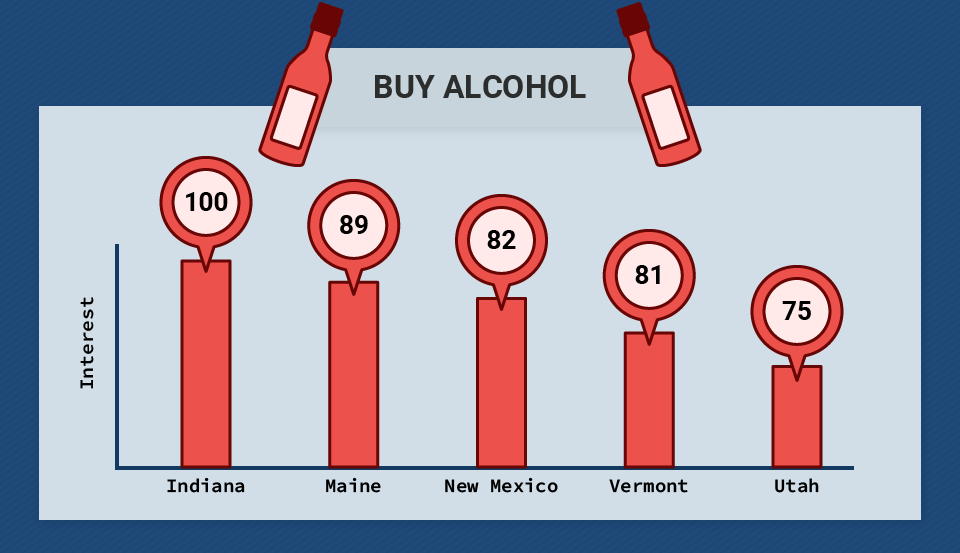 Indiana had the most interest in the term ‘buy alcohol’. Does this make them America’s biggest drinkers as well? Debatably – it could just be that people have been reacting to the state’s relaxation of its alcohol laws over the last few years. For instance, it only became legal to buy alcohol outside of bars and restaurants on Sundays in 2018. 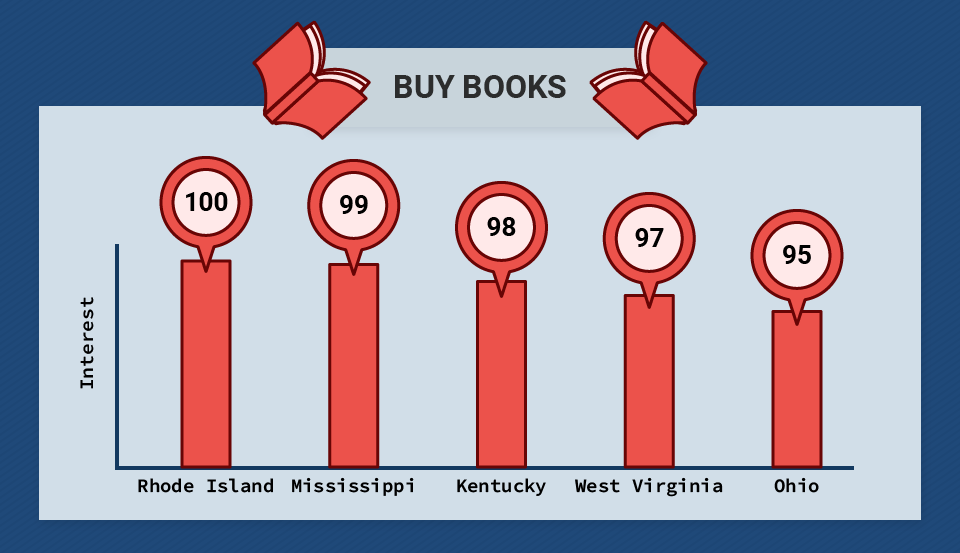 Rhode Island seems to be the most well-read state in the USA, with the highest interest in the term ‘buy books’. Meanwhile, Mississippi and Kentucky finished in 2nd and 3rd. If you consider interest in reading to be a sign of intelligence, you might find this result surprising: in 2015, the Washington Post found that Mississippi ranked 48th for intelligence amongst the US states (based on average IQ, SAT scores, ACT scores and college grad percentage). 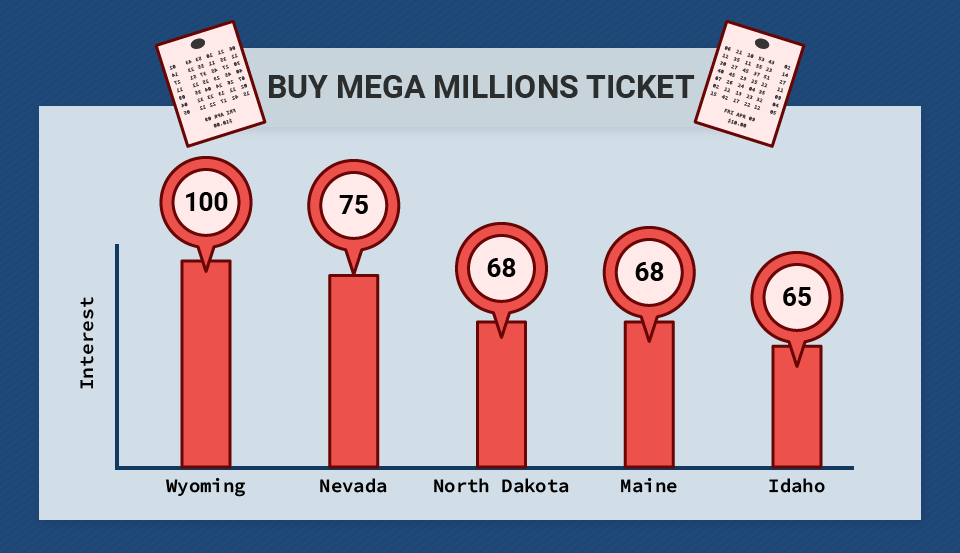 Wyoming had by far the highest interest in ‘buy mega millions ticket’. The state finished way ahead of the competition – Nevada, the state that came 2nd, had an interest level of only 75 compared with Wyoming’s total of 100. These two states were followed by North Dakota and Maine in joint 3rd. 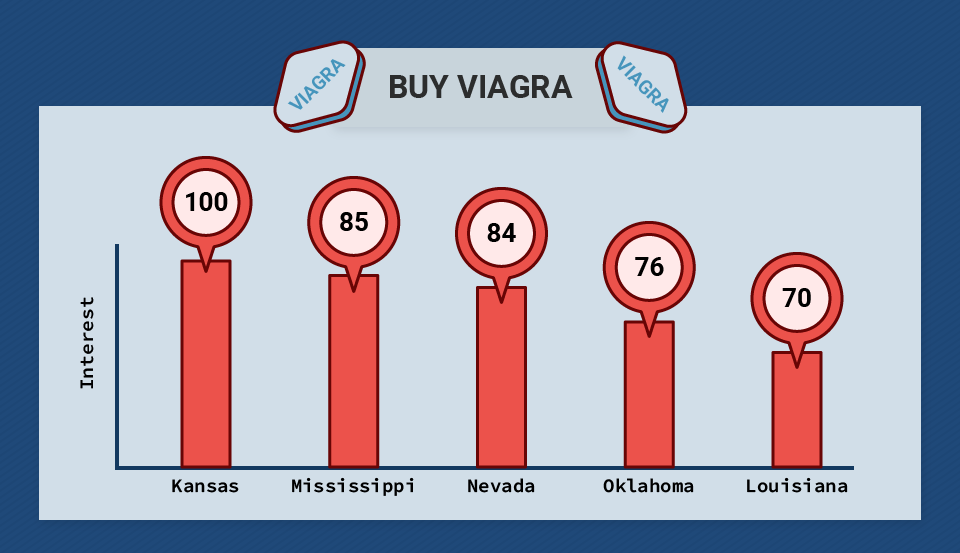 The state that showed the most interest in buying Viagra was in fact Kansas. Coincidentally, one of the first spokesmen for the widely-used product was politician Bob Dole, a Kansas native. Meanwhile, Mississippi and Nevada finished in 2nd and 3rd respectively. 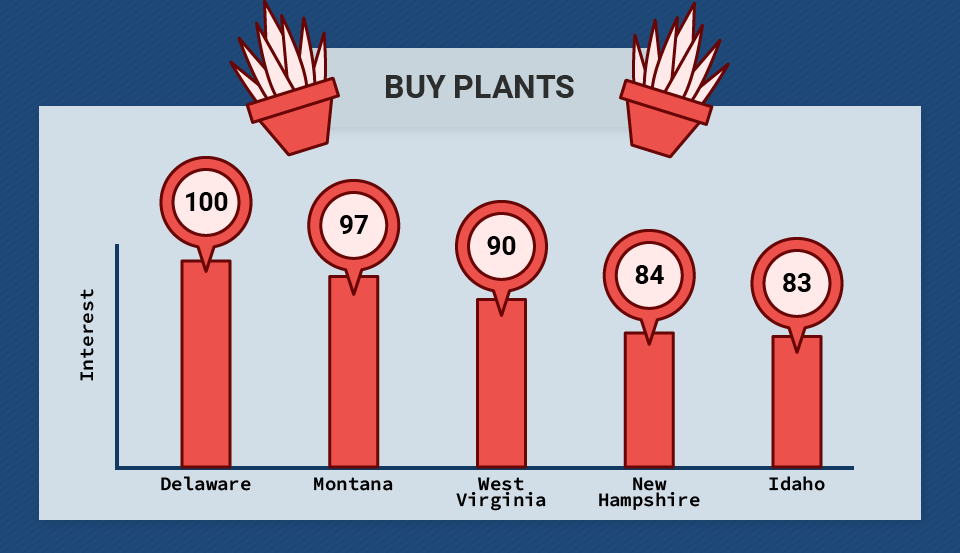 The biggest nature lovers in the USA turned out to be Delaware. The state is already amazingly diverse in terms of plant life considering its small size, with over 1,500 native species of plant. It is closely followed by Montana in 2nd and West Virginia in 3rd. 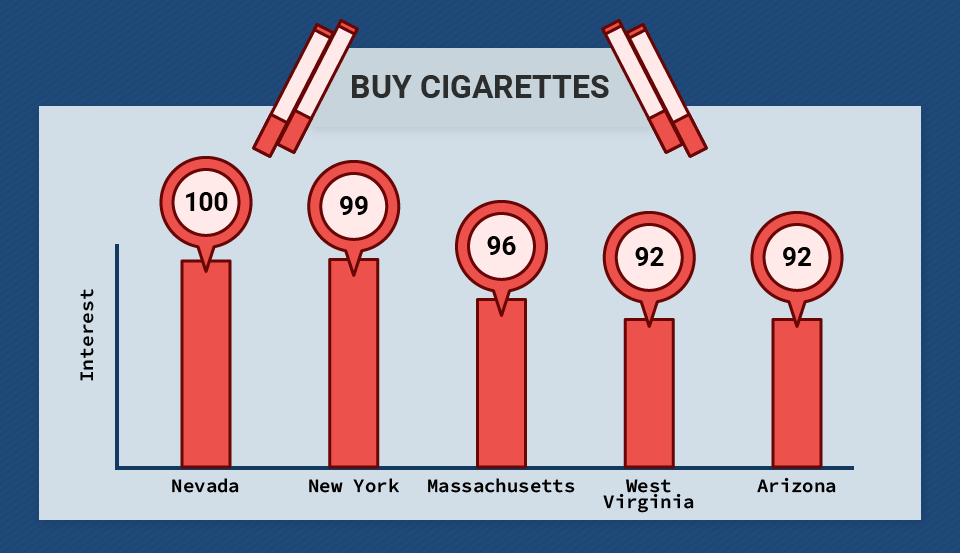 Nevada had the highest level of interest in the term ‘buy cigarettes’. Unfortunately for its cigarette-loving populace, Nevada is one of America’s more strict states when it comes to where people are allowed to smoke, although aspects of these laws were partially repealed in 2009 and 2011. 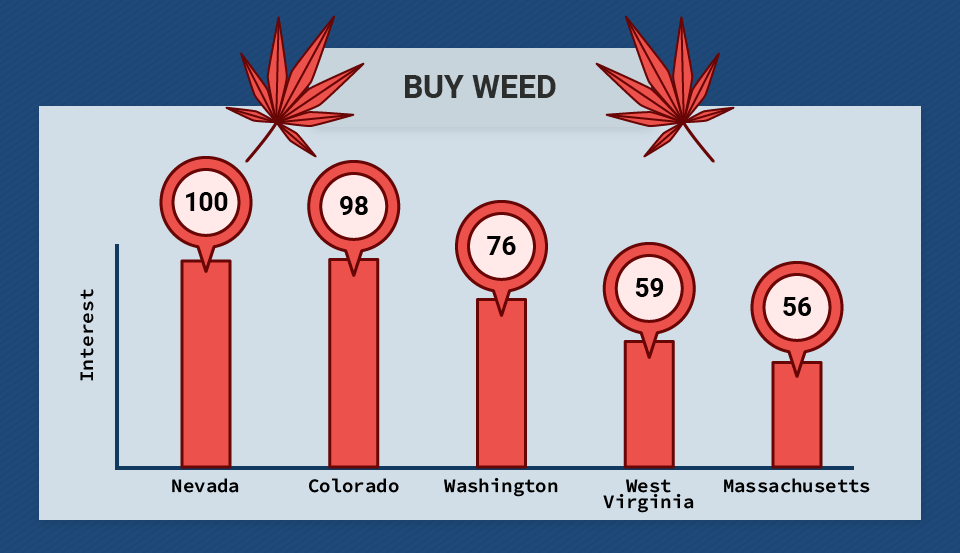 Nevada also had the most interest in ‘buy weed’ – the state certainly seems to love smoking, whatever the substance. It can’t be said that this result comes as much of a surprise, as Nevada is one of ten states where recreational use of marijuana is currently legal. 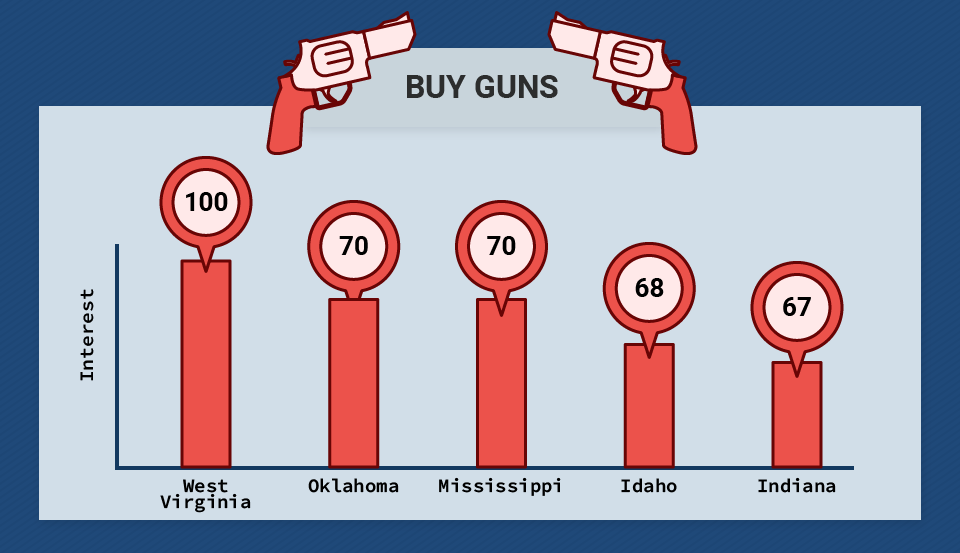 With by far and away the highest interest level, West Virginians seem to be America’s biggest gun lovers. This is a little unexpected considering the fact that, although West Virginia has recently become a constitutional carry state (allowing people over 18 to carry a concealed firearm without a permit), there are various other states with even more relaxed firearm laws, including Arizona, Wyoming & Alaska (the latter even ranked first for ‘gun death rate’ in Giffords Law Center’s Gun Law scorecard in 2018).

Oklahoma and Mississippi came joint 2nd but, with an interest level of only 70, they both fall far short of the Mountain State. 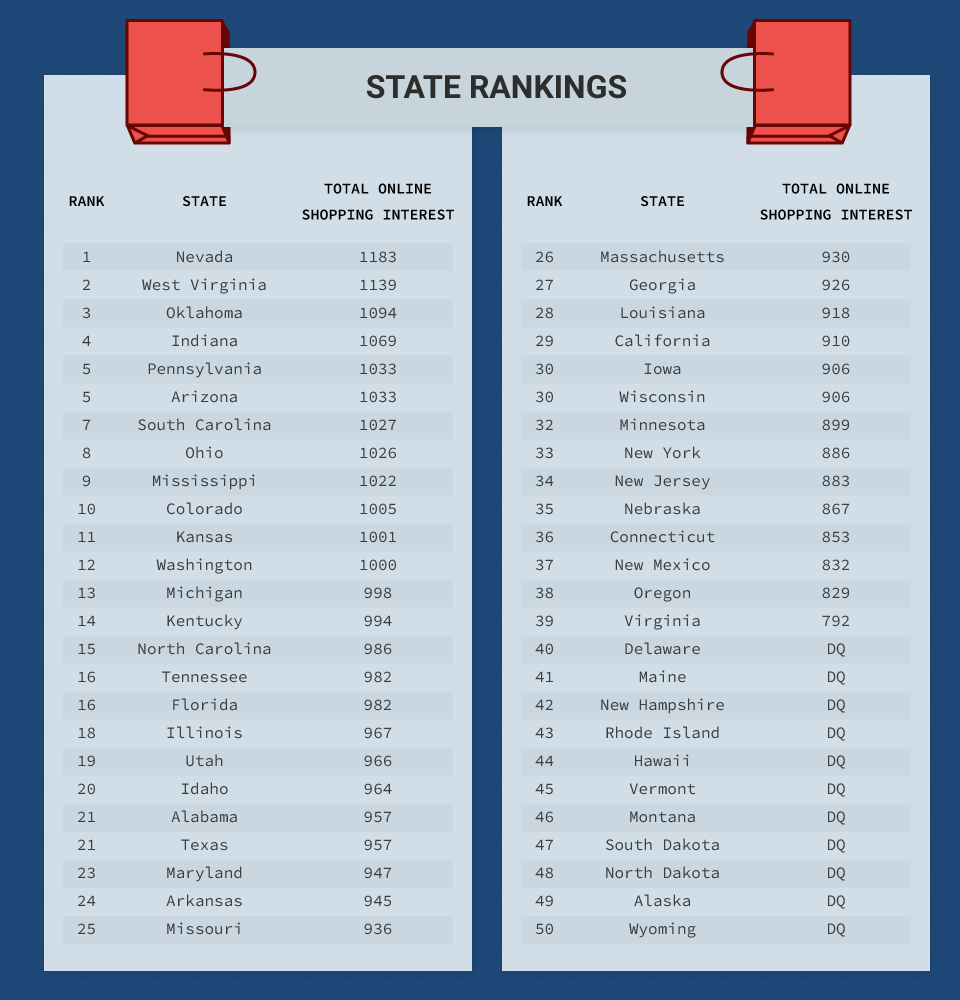 The state with the highest overall interest in our studied keywords turned out to be Nevada. The state made the top five for various keywords, including ‘buy mega millions ticket’, ‘buy cigarettes’ and ‘buy weed’. This is a little surprising considering the state’s application of new tax regulations last year – it was mandated that remote sellers (sellers without a physical presence in the state) collect and pay sales tax. This means that products sold online by these sellers will cost customers more than they used to. Evidently, higher pricing has done nothing to stop consumers from buying online…

It should be noted that we excluded states with too little data for some of our chosen terms. For example, Wyoming had the lowest score, but the state couldn’t provide data for various keywords. This left us unable to pinpoint its true ranking, hence its disqualification.

Because of this, the state that had the lowest overall interest in online shopping terms became Virginia. Coincidentally, Virginia is in the process of passing a similar bill to Nevada, which will require remote sellers to register for sales tax collection.

Do you think these rankings accurately reflect the interests of your state? Let us know in the comments below. If you’d like to see the data laid out in full, click here.