To Save at Checkout Enter Coupon Code: Bulk Saver

UPS, FedEx & USPS: Who is Most Likely to Damage Your Packages?

Published
08/09/2019
Author
U.S. Packaging a
US packaging and wrapping

It’s hard to deny that postal shipping services have become an integral part of modern life, particularly since the inception of online shopping. Without companies like USPS and FedEx delivering our orders, many of us simply wouldn’t be able to shop the way we do. That said, we’re all aware that the process doesn’t come without its risks. There’s always that slight underlying worry that your package might get damaged in transit (this is even more of an issue if the item concerned is fragile or easily broken).

We ourselves have had issues with this in the past, which led us to wonder which shipping services are the safest. We also began to wonder if certain parts of the country are more reliable than others with regards to transporting packages safely.

This, in turn, gave us the idea of carrying out a study. Our test was fairly straightforward. We planned to send packages to five states across the USA (California, Florida, Michigan, Oregon & Pennsylvania) using three different shipping services: USPS, UPS, and FedEx. This meant a total of fifteen packages, which we filled with six-packs of bottled water.

We placed three ShockWatch Labels on each package. These allowed us to see how much stress each package would go through while in transit. Each one would change color when the required level of impact was incurred upon the package. We chose three different impact indicators:

Purple would light up after measuring 37 gravitational force (g-force)

Red would light up after measuring 50g

Orange would light up after measuring 75g

To give you an idea of the level of force we’re referring to, we carried out some preliminary drop tests with six-packs to see what height the package would need to fall to activate each label:

The 37g label activated after a drop of 3ft

Which shipping services and states do you think will register with the lowest amount of shock labels? Read on to find out… 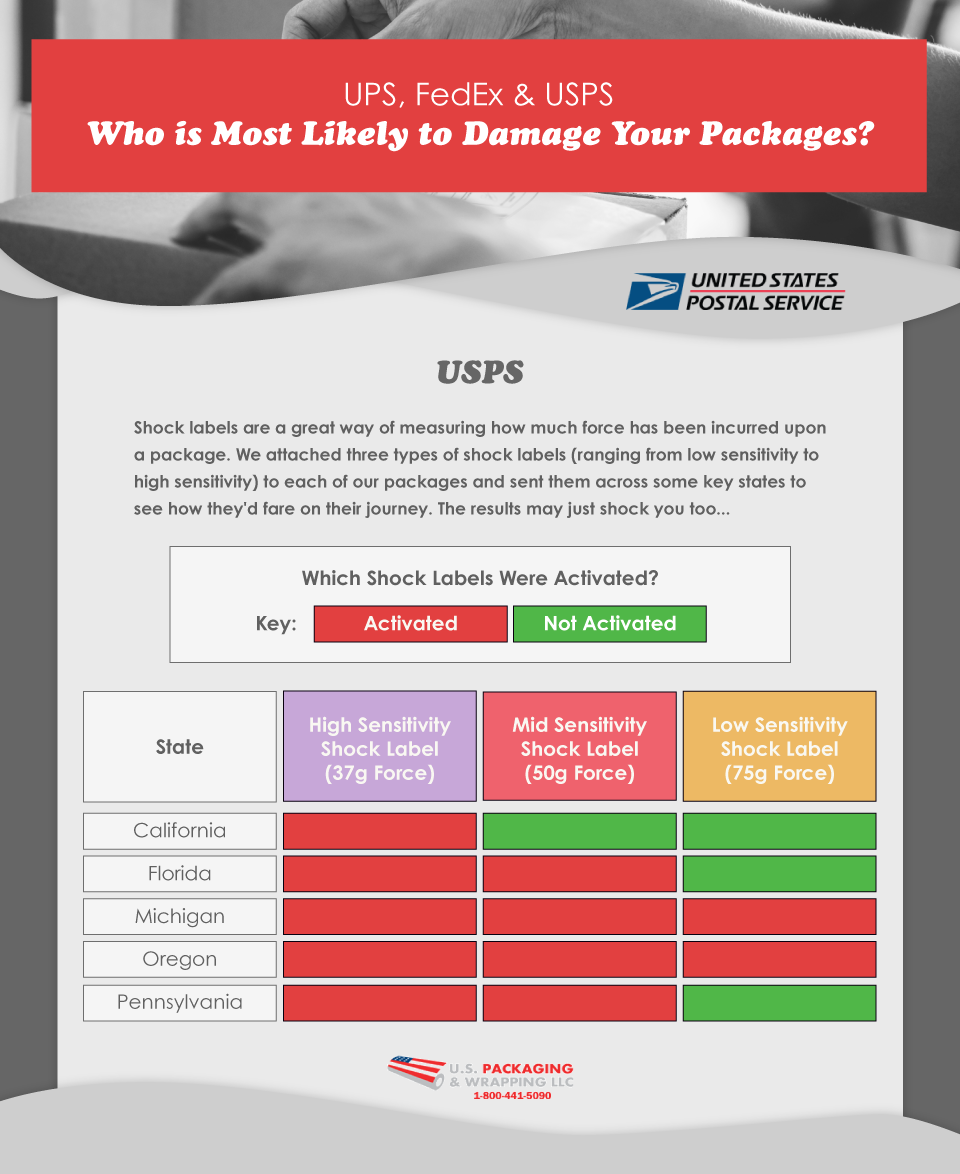 Let’s begin with the United State Postal Service, who had the fastest delivery times in every state. All five packages delivered by USPS had their 37g labels activated, no matter their destination. At the next level, four out of the five 50g labels were activated – the only package label to avoid activation was California’s. Finally, the 75g labels were only activated in two of the five states, namely Michigan and Oregon.

This left USPS with eleven out of fifteen labels activated. We found it a little surprising to see that two of the five 75g labels had reported such high amounts of impact, especially considering our in-house testing. Let’s move on and see how the other two shipping services compare. 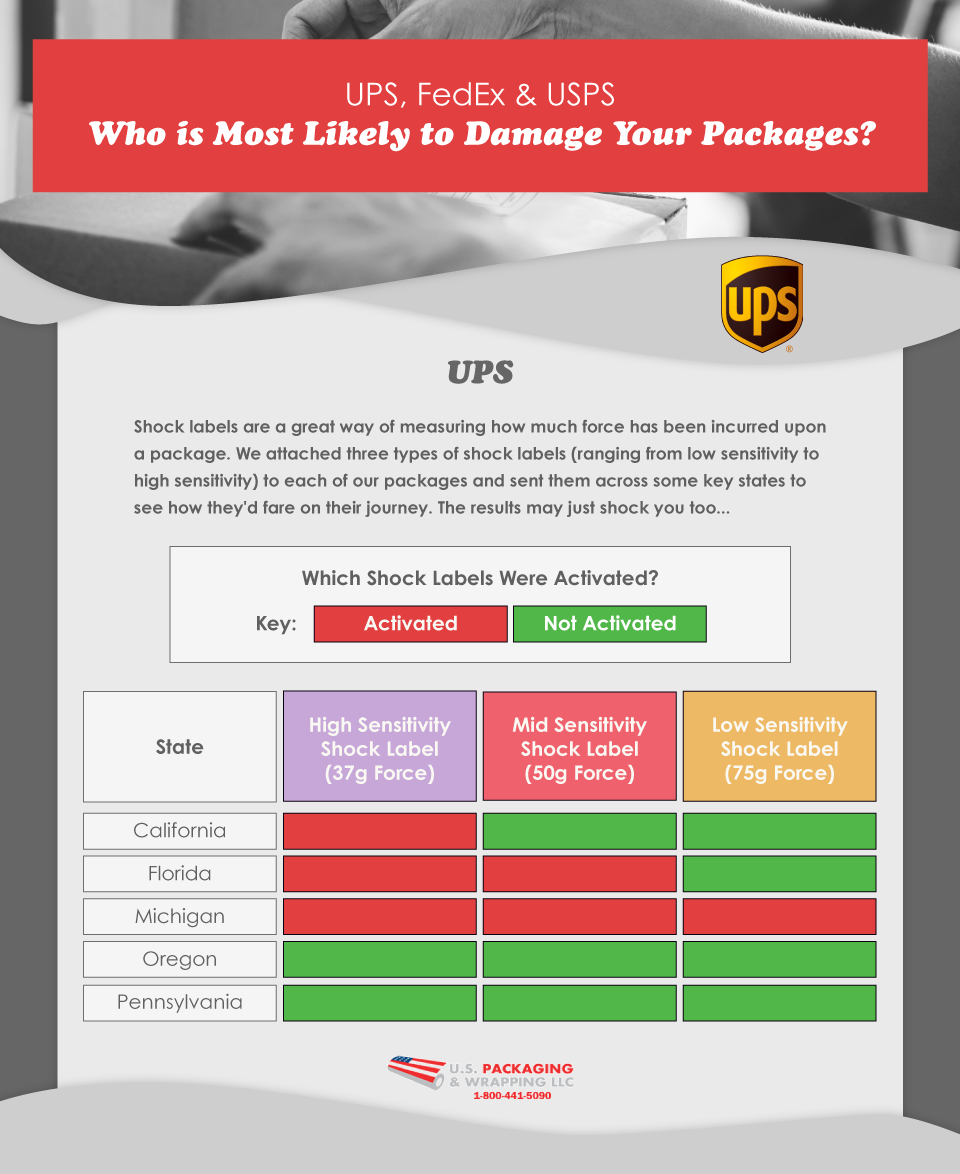 In opposition to the United States Postal Service, UPS’ packages had the longest delivery times in every state. However, they also had a far lower number of shock labels activated on arrival - for instance, the packages delivered to Oregon and Pennsylvania had no labels activated at all. Meanwhile, California and Michigan matched their label activations with USPS: the former had only the most sensitive label activated, and the latter had all three labels activated. Michigan as a state doesn’t seem to be doing too well so far – every single label sent to that state thus far has been activated.

UPS did very well overall, with only six out of fifteen labels activated in total. 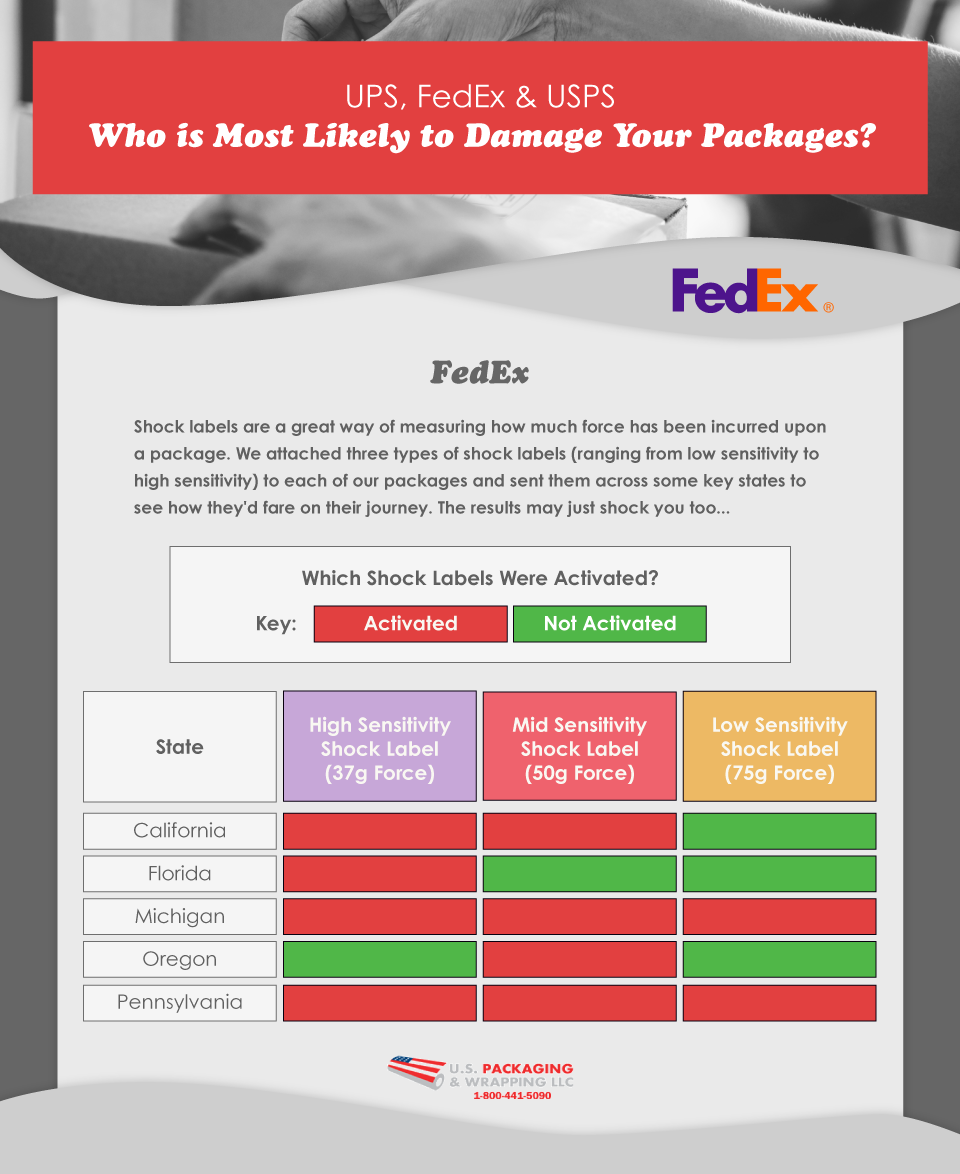 Oregon and Florida had only one label activated with FedEx but, interestingly, Oregon’s single activation was found on the 50g label, not the 37g label.

This left FedEx with ten out of fifteen labels activated, barely below USPS’ total of eleven.

Let’s start with state delivery performance. 1st place is shared by California and Oregon, who both had four out of nine labels activated (an activation rate of 44%). Where the two states differ is in consistency: Oregon had three labels activated by USPS but none by UPS, while California didn’t have a single 75g label report any impact.

At the other end of the state ranking, Michigan came last – all three of its packages had all of their labels activated. Does this mean there’s a higher risk with delivering packages to the Great Lake State?

Meanwhile, Florida and Pennsylvania both had five labels activated, leaving them just behind California and Oregon.

In terms of shipping services, UPS was the clear winner. It had nearly half as many labels activated as FedEx in 2nd place, while USPS was the worst in our study, coming in 3rd.

Do you think our results accurately reflect your experiences with different states and shipping services? Let us know in the comments section below.