Save On All Orders at Checkout With Coupon Code: bulk saver

Packaging is our specialty and there is nothing more important than packing for a holiday. Our customers are often asking us how our products can help them to best secure their luggage for a long flight, but however, you secure it you are still in the hands of an airline. There are many horror stories about bad experiences when flying, however, are these the majority or are these in the minority?

We decided that the best way to answer this question was by delving into the world of online reviews. We started by collating thousands of reviews from the world’s biggest airlines (sourced from TripAdvisor, Trustpilot and Skytrax). Once collected, we started crunching the data to analyze it further. The word cloud visualizations you’ll find below come directly from this data, which allowed us to see which words are most commonly used when discussing each airline. This gave us an interesting insight into how each of these airlines are being reviewed online and into the day-to-day experiences of their customers.

Which companies do you think have come out looking the best? Do the visualizations fit with your experiences of flying with them? 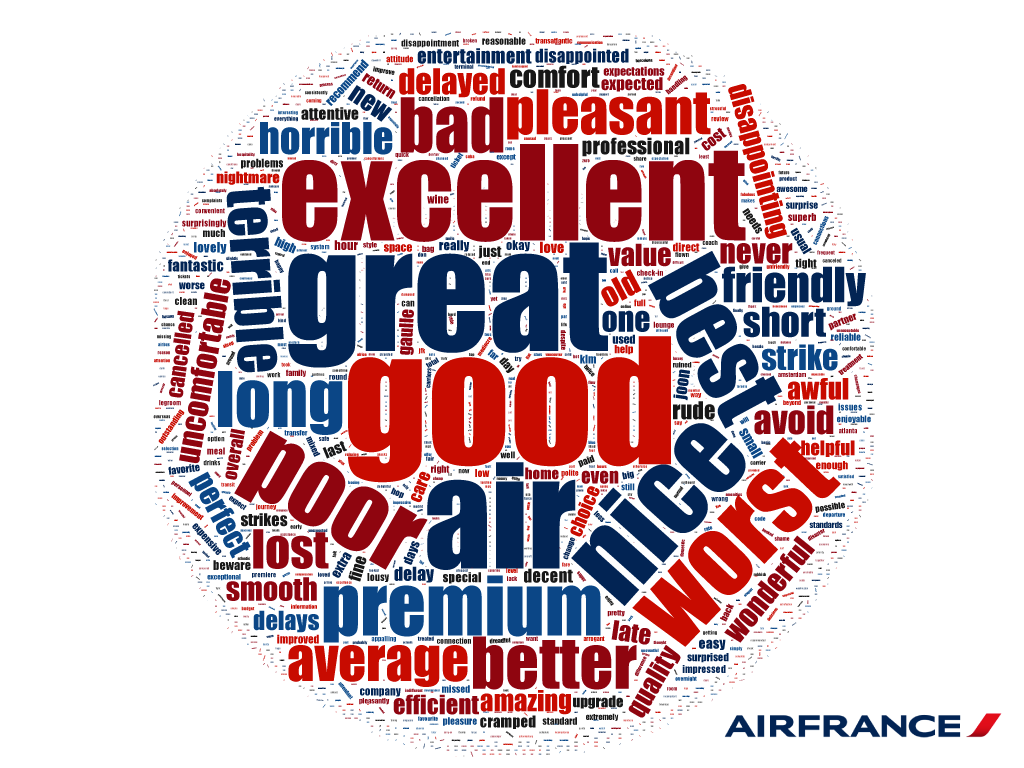 As you can see, Air France’s most common words are ‘good’, ‘great’ and ‘excellent’. A good sign, one might think, although you’ll notice these words become a prevailing theme as we make our way through each of the word clouds.

Something that marks this airline apart from its competitors is the relative lack of terms relating to scheduling problems: while the word ‘delayed’ can be found, it is far less noticeable than airlines like American Airlines and EasyJet. On the other hand, negative words, including ‘poor’, ‘terrible’ and even ‘worst’, are definitely larger for Air France than for most of the other airlines. To make matters worse, Air France had the highest rate of the word ‘avoid’ appearing in their reviews. 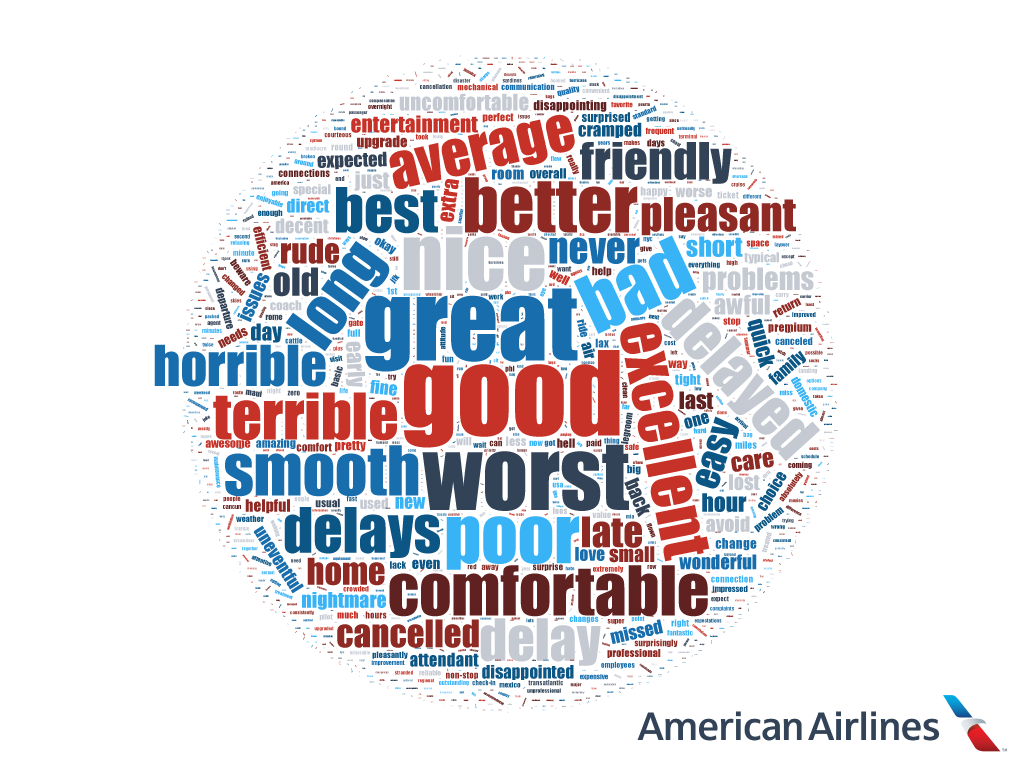 The most prominent words in AA’s word cloud are rather mixed. Again, we see terms like ‘great’, ‘good’, ‘nice’ and ‘excellent’. However, other words like ‘worst’, ‘bad’, terrible’ and ‘long’ are also highly visible here.

Terms like ‘smooth’, ‘comfortable’ and ‘pleasant’ suggest the feeling of dignified luxury when it comes to traveling with the airline. The words ‘uncomfortable’ and ‘cramped’ still manage to sneak in, but overall the word cloud seems positive for American Airlines. Where AA seems to suffer is in organizational terms. For instance, ‘delayed’, ‘delays’ and ‘canceled’ are all very noticeable. 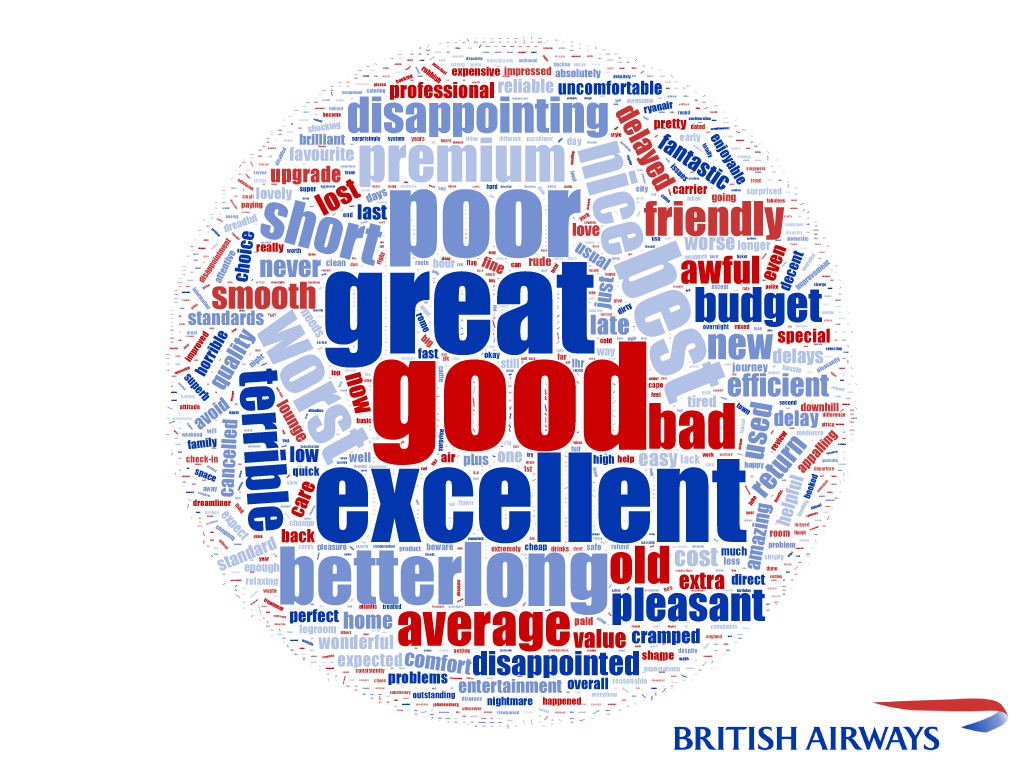 The sizeable presence of the words ‘disappointing’ and ‘disappointed’ suggests that people have certain expectations of British Airways and that these expectations are often not met. This might explain the lack of positive descriptive words – aside from moderate use of ‘smooth’, there aren’t many of the terms we may expect, like ‘comfortable’.

On the plus side, words like ‘delay’ and ‘canceled’ are notable by their absence. It seems that British Airways have comparatively few problems in that department! 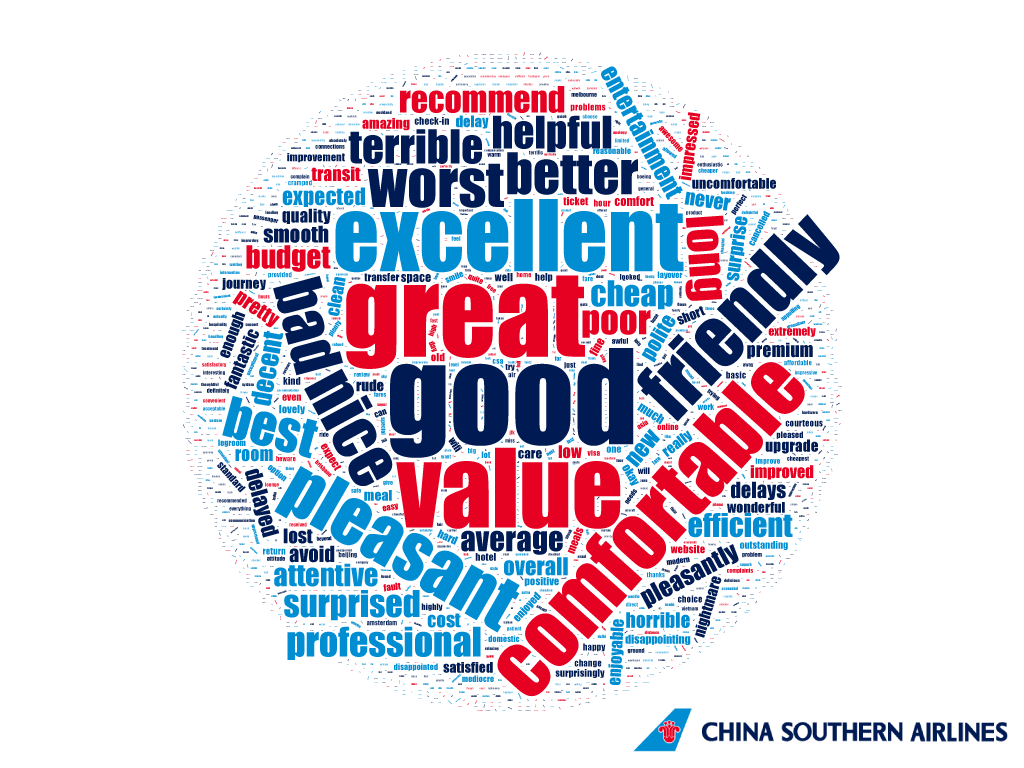 Not only is China Southern Airlines’ word cloud unusual through the presence of the word ‘value’, but this is also one of its most common terms. Combined with the more minor additions of ‘budget’ and ‘cheap’, it appears that many passengers have found good deals through this airline.

One might expect the drawback of this to be an increase of negative words – you get what you pay for, after all, as evidenced by terms like ‘worst’ and ‘terrible’ being as visible as ever. Generally speaking though, the larger words tend to be positive, like ‘comfortable’ and ‘pleasant’. The airline also had the highest rate of appearances of the term ‘friendly’ in their reviews, totaling at 2.16%. If customer service is your most important criteria, it sounds like China Southern has you covered. 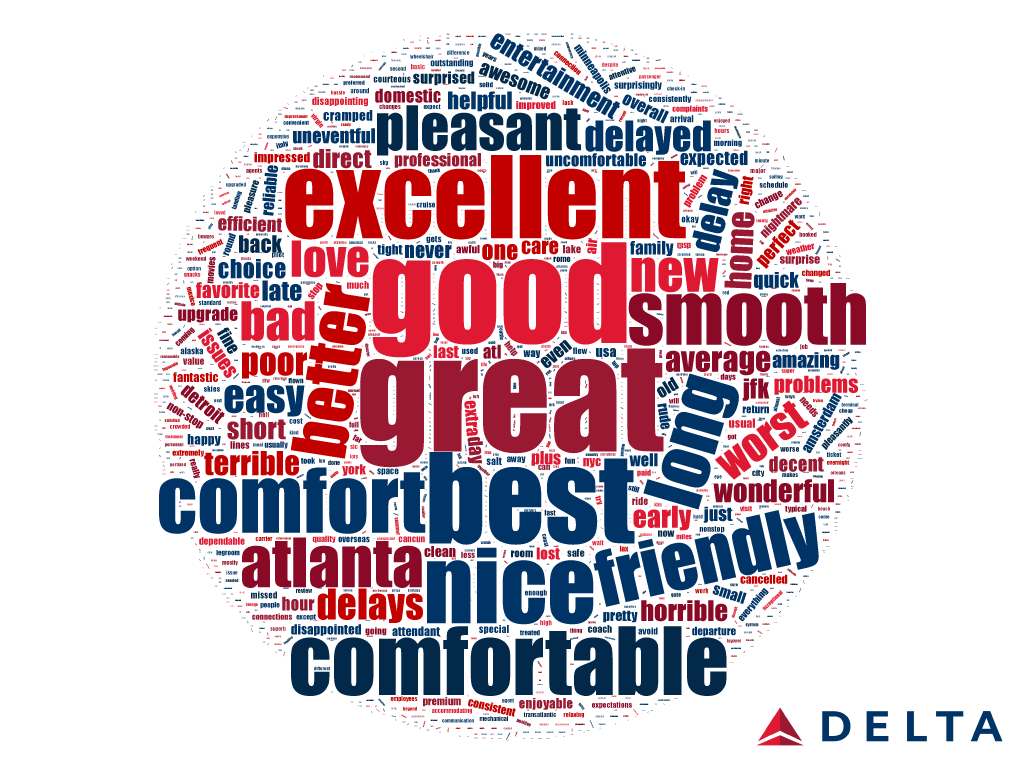 Delta’s word cloud seems fairly positive overall. ‘Comfort’, ‘comfortable’ and ‘smooth’ all make their presence known, other words like ‘nice’, ‘friendly’ and ‘better’ are all larger than usual, and even ‘love’ is a noticeable size. The airline has a relatively high proportion of positive terms with 61%.

Minor timing issues are suggested by terms like ‘delays’, ‘delayed’, etc. However, the words are a lot smaller than in many of the other word clouds and other words like ‘early’ and ‘easy’ arguably suggest that many other people haven’t had problems in this regard. 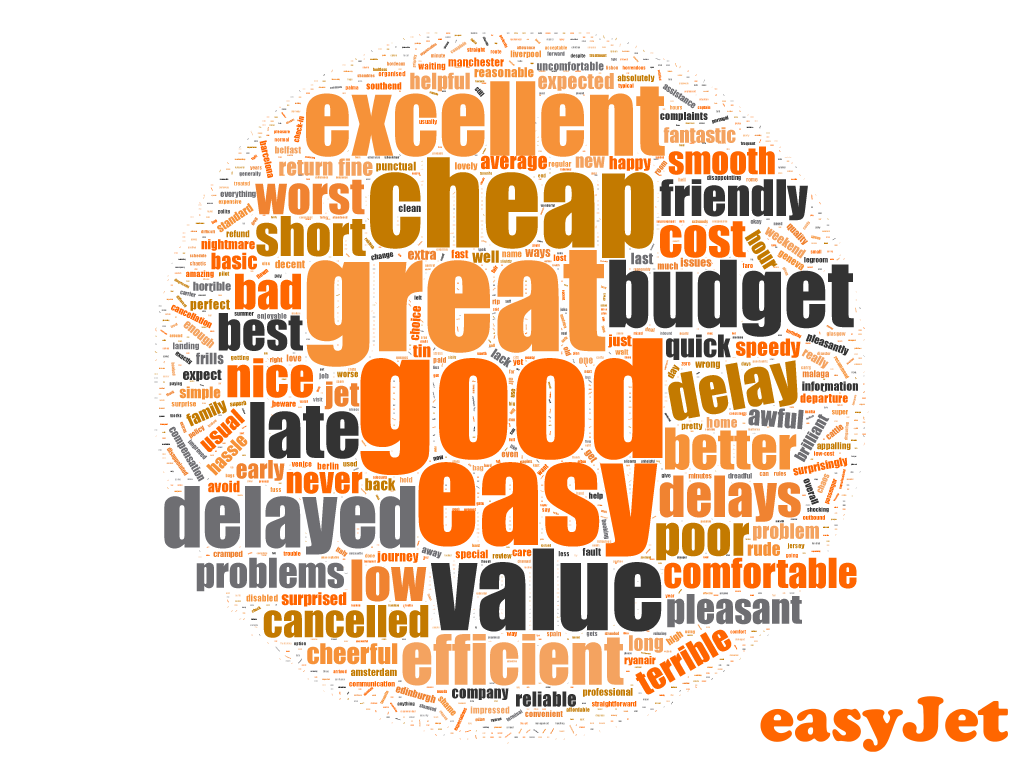 It might be a surprise to some that, in spite of their questionable reputation, easyJet’s most common words are fairly positive! Words like ‘great’ and ‘good’ are only matched by terms relating to easyJet’s widely known low prices, like ‘cheap’, ‘budget’ and ‘value’.

Delving into the slightly less common words is the point at which cracks start to appear. Terms like ‘nice’ and ‘efficient’ are still present, but we also find words like ‘delayed’ (as well as ‘delay’ and ‘delays’), ‘late’ and ‘problems’. In fact, easyJet had the highest chance of having ‘delayed’ in their reviews compared to all their competitors: the word was present in 1.63% of reviews. Evidently, easyJet’s time-keeping leaves room for improvement.

One more term, worrisome by its size, is ‘canceled’. Not something anyone would want to see with regards to their chosen airline… 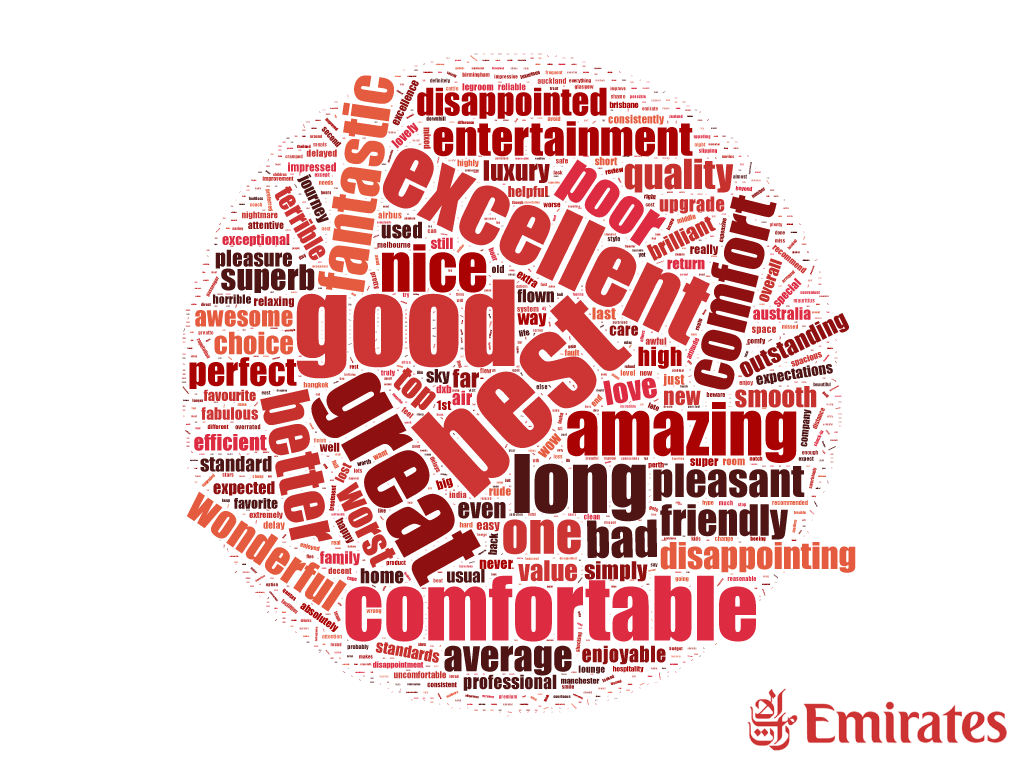 Emirates stands out not least due to the sheer variety of positive terms it receives. Aside from the usual ‘good’, ‘great’, ‘excellent’ and ‘best’, we have several new frontrunners like ‘amazing’, ‘fantastic’ and ‘wonderful’. The airline also had the highest rate of appearances of the word ‘excellent’, with 4.87% of review titles containing the term. Emirates also has the highest proportion of positives in its top fifty terms out of all the airlines studied here.

Another word that’s bigger than usual is ‘entertainment’. It seems that the inflight movies, tv shows, music and games offered by Emirates are, if not better than competing airlines, at least more review worthy.

There is definitely a greater variety of positive terms in this word cloud. Aside from the words already mentioned, there are many others, like ‘luxury’, ‘superb’ and ‘perfect’, that are rarely seen across the other word clouds. On the other hand, we can see common negative terms as well, with the largest being ‘poor’, ‘disappointed’ and ‘bad’. 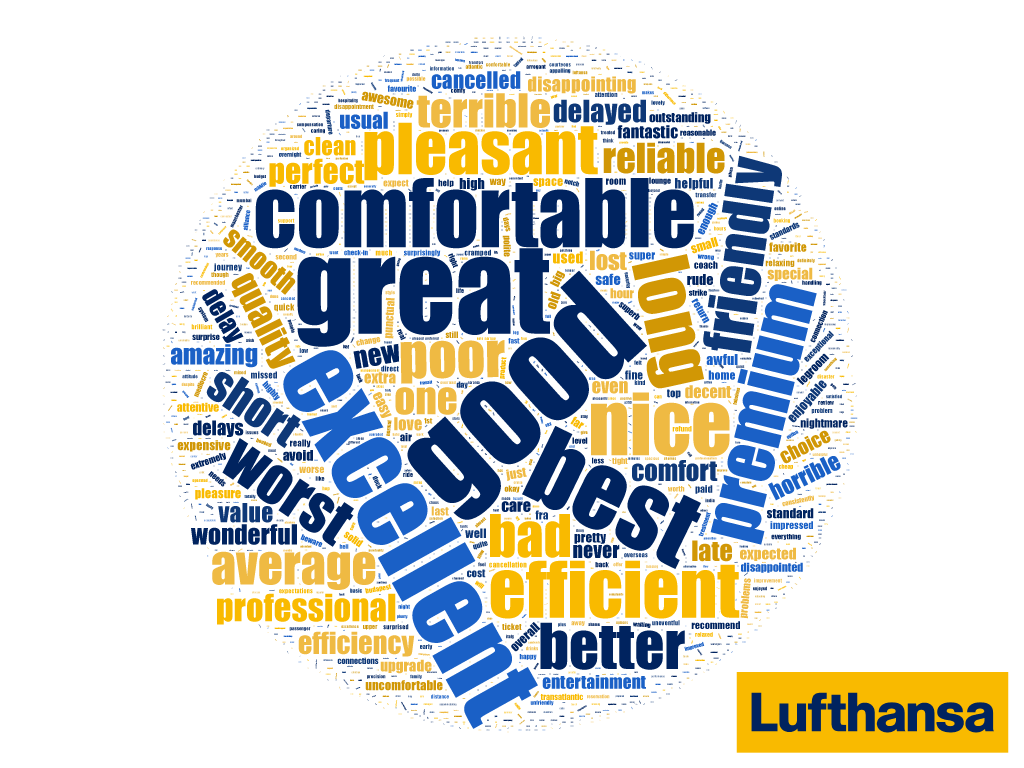 One noticeable aspect of Lufthansa’s word cloud is a feeling of professionalism. Aside from ‘professional’, we can see terms like ‘efficient’, ‘efficiency’ and ‘reliable’. Another point in the airline’s favor is the fact that it has the highest percentage of reviews containing the term ‘comfortable’, totaling at 2.79%, as well as the term ‘good’, totaling at 12% of all review titles analyzed.

Like all the airlines we’ve studied, Lufthansa’s results aren’t perfect; there are various negative terms throughout. However, the negative terms seem broader than many other airlines, suggesting that its issues aren’t centered around one major problem and are likely more related to general issues people have with flying. The words include ‘bad’, ‘poor’ and ‘worst’ – not great to hear, but standard results at this point. 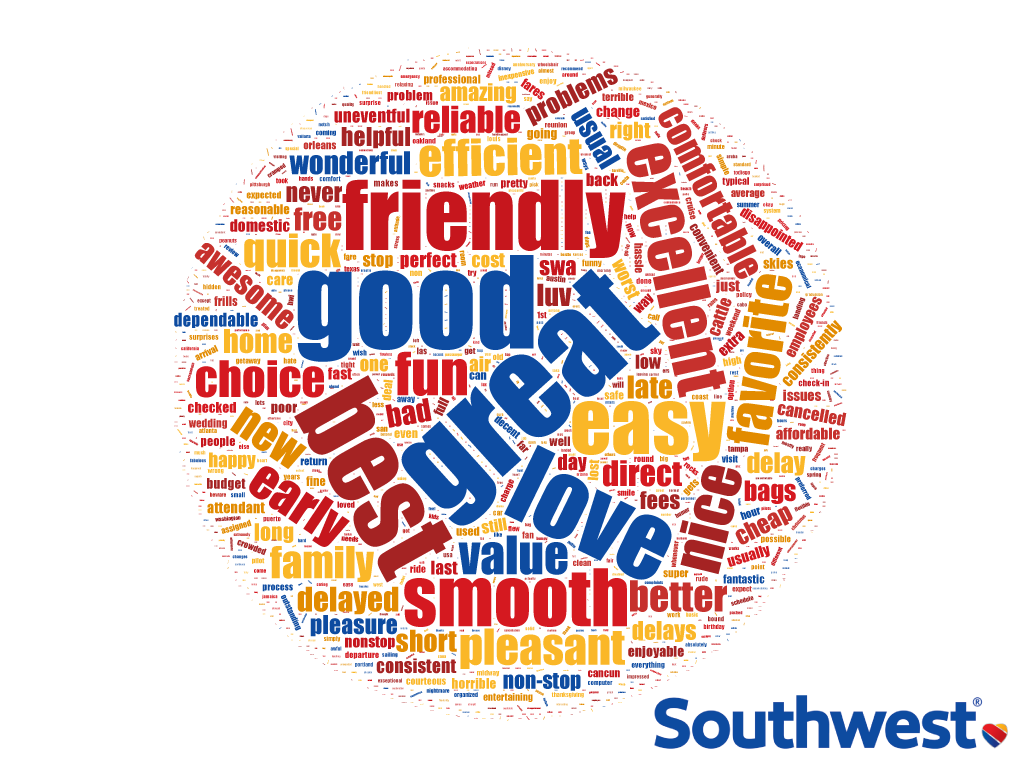 Even the most cursory glance will tell you that Southwest Airlines’ word cloud is a rather positive one. Not only are all the words we’ve come to expect out in force (e.g. ‘good’, ‘great’, ‘best’, ‘excellent’) there are also some hitherto rare or unseen positive terms. Example include ‘favorite’, ‘early’, ‘love’, ‘easy’ and ‘quick’.

This isn’t to say that there are no negative terms at all - look closely and you’ll notice words like ‘delayed’, ‘late’, ‘canceled’ and ‘bad’. However, these are in a definite minority. Overall, Southwest definitely seems to give its customers a satisfactory experience. 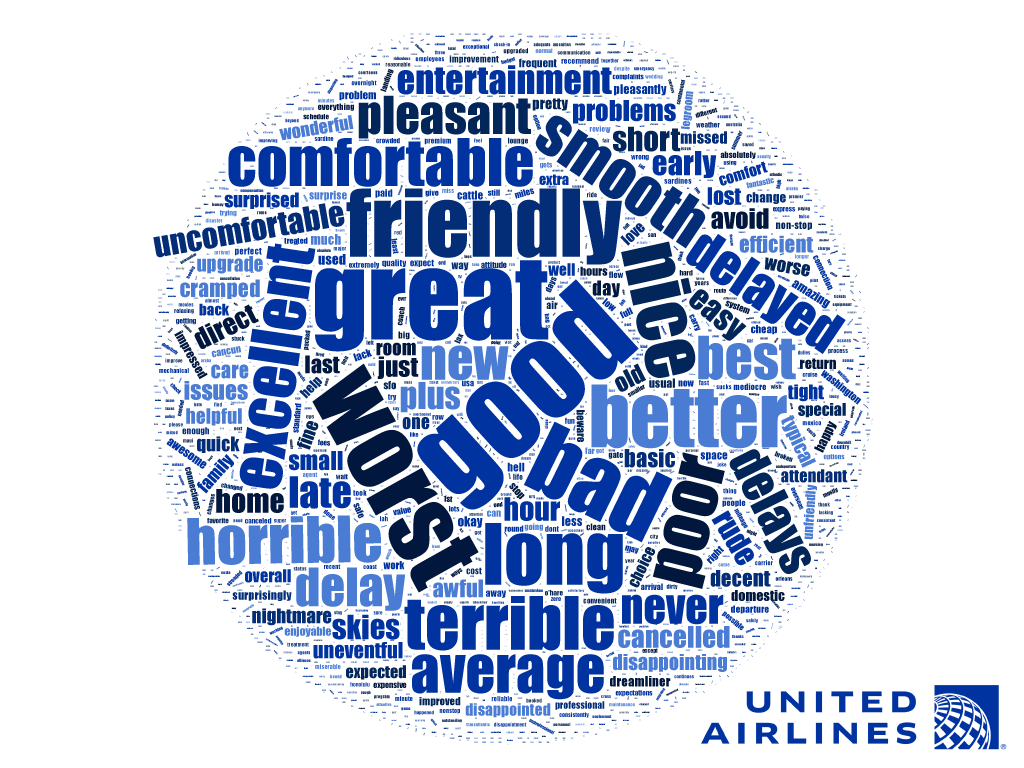 The reviews of United Airlines were fairly mixed. While we can see the usual positives like ‘great’, ‘excellent’ and ‘friendly’, the word cloud is also littered with some very visible negatives. The most obvious is ‘worst’, ‘horrible’, ‘terrible’ and ‘bad’. Other negatives include references to flight unreliability: ‘delay’, ‘delayed’, ‘delays’ and ‘canceled’ find themselves in prominent positions once again. United Airlines also has the unfortunate accolade of having the highest percentage of negatives and the lowest percentage of positives in their top fifty terms out of all the airlines studied.

That said, while the negative terms are more widespread here than many of the other word clouds, they’re still in a minority compared to the positives.

It’s hugely important that companies keep an eye on their customer reviews - not just because they have an effect on prospective customers looking to spend their hard-earned money, but also because it can show patterns of the kind of working culture the company is cultivating. These reviews can show them their strengths and, more importantly, their weaknesses. That kind of information makes it much easier for them to improve whatever they’re offering and provide a better service for their customers.

If you would like to see the raw data from which we built the word clouds, as well as each word’s number of appearances and the percentage of review titles that each word appeared in, click here.